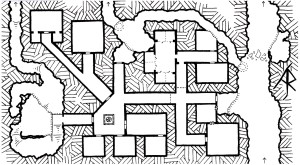 Behind Fort Blackcove, built into a huge stony hill on the shore of a salty sea, there is a tunnel that is hidden when the tide is high and protected by treacherous rocks. During low-tide, though, the narrow opening can be found and the tunnel traversed. The current can be swift, however, so if one isn’t careful, one’s boat will be dashed on the rocks further downstream. If one is sharp, one will notice the stone ladder built into a ledge (once there was a rope ladder as well, but it has since rotted away). At the top of the dank ledge is a heavy door, perfectly sealed and rusted shut.

The old lords of Fort Blackcove learned not to open that door too often, for it may let the sea in, but they used the chambers to build a secret prison. In this prison the lords kept the captives they never wanted their allies to know about, where they could torture whomever they please and let them waste away in the damp darkness. The goalers never cared that it was originally built by Naga, only that none ever escaped. The serpentine artwork and frescos are painted over or washed away.

Over the years, the salt water and underground streams have worn away the walls around some of the rooms, causing floors to collapse and flooding during high tide. One cave has been worn away so far it’s nearly washed some of the cells away.

No one can say what might be found in the dark torture chambers that have been forgotten by all living men. Perhaps what remains are only anguished souls, a monstrous goaler who never left the defunct prison, or perhaps the Naga have returned to restore their outpost.

“You’ve hit yet another impasse. Ahead of you and to your left are thick iron bars, though rusted at their base. Behind you is the hidden passages you passed through to enter this gods-forsaken dungeon. To your right you can see the other side of the thick door that keeps out the seawater at high tide. The air here is moist and smells of salt and seaweed. In fact, everything below a handspan’s height on the wall is encrusted with salt and tiny sea-creature’s shells. As you’re looking around the walls for a way to raise one or the other portcullis, you hear a high-pitched screech that echoes from all directions. You hope that whatever did that is still on the other side of those bars and doesn’t know another way around…”

About The Dais and Column

Written by Adam Rizevski, an avid player and DM of Labyrinth Lord, D&D 3.5, and Pathfinder (and dabbling in other systems).

The Column will be updated 3 times a week: House Rules or an article on Tuesday, a Map on Thursday, and random content on Saturday (a monster, a magic item, random table, adventure, lore, whatever).

Enjoy and let me know what you think!

Search the Dais and Column

People More Clever Than I 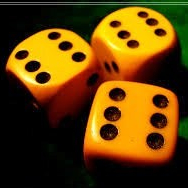 In cyberspace no one can hear you scream

A blog about the play and design of role-playing game systems.

Children of the Ampersand