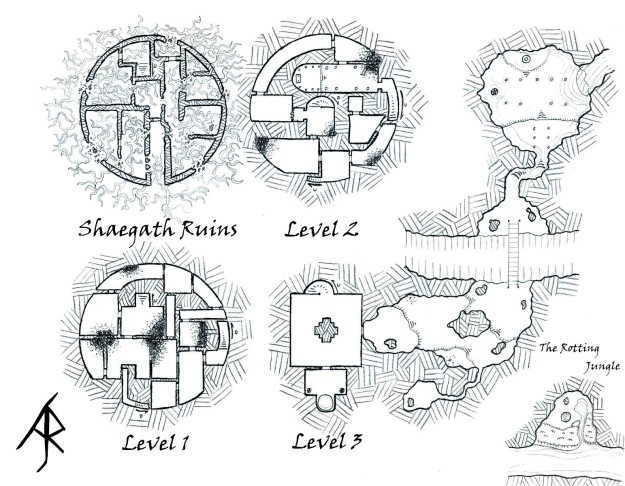 Centuries ago, Shaegath Tower used to be the isolated home of a Drow Sorcerer named Vao Shaegath who was obsessed with controlling nature. He’d seen the surface and loved the hot, chaotic jungles and the deadly animals that hunted within them, even as he hated the people who took it all for granted. So when we returned to the his cavern deep underground, Vao set about trying to replicate something of what he’d seen.

He met with partial success, but things went quite poorly for him in the end. The upper two floors of the tower were utterly destroyed in some kind of explosion. Those who have heard of Shaegath suspect he was trying to create a strong enough light source to nourish the dying jungle he’d created. How he created that jungle is another mystery, but something in that tower keeps the jungle in a state of constant renewal.

In the bottom-right corner of the map is an overview of The Rotting Jungle. The tower is in the center next to a small rocky-shored lake and behind the thick, fetid foliage. Ideally, the tower is located underground, in a cave far from the light of the sun, but it could also fit in a bayou setting, surrounded by sharp cliffs that hunch over the clearing menacingly. It should also only be accessible by water, giving them the option of stopping on the shore and trekking through the jungle or taking it up the stream (and potentially getting stuck).

The Rotting Jungle can be smelled about half a mile before the party encounters it. The trees are all tall, twisted and have dark, dropping leaves. The vegetation underneath is mostly razorgrass and thorny vines. The air is hot, humid and oppressively thick. Various rustlings, grunts, and squeals evidence that the interior has occupants. Moving through the Jungle is at half movement and horses will move at a quarter speed because they are constantly caught on vines. In fact, there’s a good chance of running into plants with poisonous spines.

The small lake, more of a large pond, is surrounded by large flat rocks upon which rest Giant Toads and Frogs. They’re not terribly hostile unless someone gets too close to them or if a boat should get to close to their clutches of eggs.

The ground level of the tower is surrounded on the outside by the debris of the ancient explosion. The inside filled with rubble, all the doors are fallen and the walls are being slowly dismantled by thick vines. The second floor can be climbed to, but is quite empty and unstable. The third floor is completely gone except, perhaps, for a small section of wall and a single 5′ square section of floor.

The levels below the tower are damp and the cobblestone walls have collapsed where roots have pushed through, Getting further than Level 2 requires the secret doors to be found. Perhaps a false MacGuffin could be placed on this level.

Level 3 features a puzzle-door that leads into a large cave with a chasm. Beyond is an ancient water-temple that predates the tower (and was the reason Shaegath decided to build it here). The waterfall connects to the lake above, but I don’t recommend anyone trying to climb up it. I used a Shambling Mound as a guardian here.

Later on, I’ll include a full adventure for this location. I definitely feel it’s one of my more visually interesting maps.

About The Dais and Column

Written by Adam Rizevski, an avid player and DM of Labyrinth Lord, D&D 3.5, and Pathfinder (and dabbling in other systems).

The Column will be updated 3 times a week: House Rules or an article on Tuesday, a Map on Thursday, and random content on Saturday (a monster, a magic item, random table, adventure, lore, whatever).

Enjoy and let me know what you think!

Search the Dais and Column

People More Clever Than I

In cyberspace no one can hear you scream

A blog about the play and design of role-playing game systems.

Children of the Ampersand